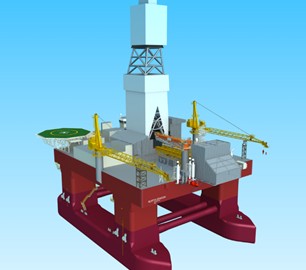 YCRO has secured an order from Beacon Holdings Group Ltd. (The Owner) to build one unit of harsh environment ice class semi-submersible drilling rig. The rig will be named the Beacon Atlantic.

Scheduled for delivery in QTR 4 of 2016, Beacon Atlantic will be built to the GM4-D design, which is carried out in cooperation between YCRO and the designer Global Maritime. In addition, the Owner has an option to build another similar semi-submersible drilling rig with YCRO.

Beacon Atlantic is able to operate at water depth up to 500m and drill wells down to 8000 meters. It is equipped with NOV drilling package, DP3 and 8-point mooring system. The rig is designed to operate in the harsh North Sea environment and also other challenging regions such as the Arctic and Barents Sea.  It is able to resist the strongest storm in the North Sea, and fulfills the requirements of NMD, NORSOK and NPD Standards. The rig is classed by DNV.

Beacon Atlantic is the second GM4-D design semi-submersible drilling rig contracted by YCRO after the first unit which is named as North Dragon. North Sea Rigs AS is managing the projects on behalf of the owners for both rigs.